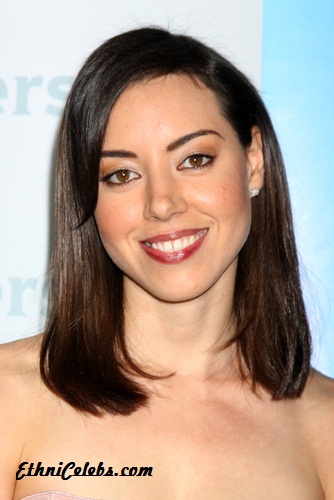 Aubrey Plaza is an American actress, comedian, producer, and writer. Her roles include Parks and Recreation, Safety Not Guaranteed, Scott Pilgrim vs. the World, Life After Beth, and Mike and Dave Need Wedding Dates.

She is married to writer and director Jeff Baena.

Aubrey has stated that she can not speak Spanish:

My grandfather came over from Puerto Rico and raised his kids speaking English so that it would be easier for them to assimilate… My family speaks to me in Spanish… and I respond in English.

Aubrey has stated (and again here) that a 23andMe DNA test showed her genetic ancestry to be:

Two of her paternal great-grandparents were named Chico and Delores. They were well-known flamenco dancers.

Aubrey’s maternal grandfather was Philip Francis Dougherty/Gordon (the son of Roy A. Gordon and Fannie/Frances M./B.). Philip was born in Delaware. Roy was the son of Levi Gordon and Rebecca Statler.

Aubrey’s maternal grandmother was Mary Maxine Leager (the daughter of John Wesley Leager and Bessie May Anderson). Mary was born in Maryland. John was the son of Charles Henry Leager/Leagar and Sarah Rebecca Pinder. Bessie was the daughter of Lodi Anderson and Annie A.

Genealogy of Aubrey’s maternal grandmother, Mary Maxine Leager (focusing on her own mother’s side) – http://jimsgenealogy.net