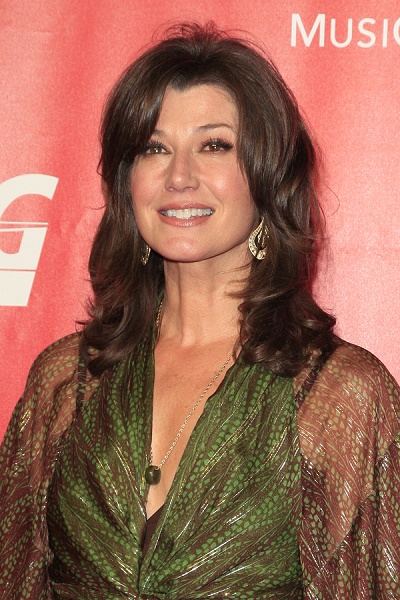 Grant in 2014, photo by kathclick/Bigstock.com

Amy Grant is American singer, songwriter, musician, author, and media personality. She is known for her work in the contemporary Christian music genre. She has been termed The Queen of Christian Pop.

Amy is the daughter of Gloria Dean (Napier) and Burton Paine Grant. She is married to country musician Vince Gill. Amy has three children with her former husband, musician Gary Chapman, and a daughter with Vince. Her great-grandfather, A. M. Burton, founded the Life and Casualty Insurance Company of Tennessee.

Amy’s patrilineal ancestry can be traced back to her thirteenth great-grandfather William Grant of Roxby, Yorkshire, England.

Amy’s paternal grandfather was Otis Paine Grant (the son of Henry Hastings Grant and Isabel Paine). Otis was born in Ohio. Henry was the son of Edwin Hodges Grant and Sarah Thompson. Isabel was the daughter of Timothy Otis Paine and Agnes Howard.

Amy’s paternal grandmother was Mizella Burton (the daughter of A. M. Burton, Andrew Mizell Burton, and of Lillie May Armstrong). Mizella was born in Tennessee. Andrew was the son of John Booker Burton and Sarah Elizabeth Lafferty. Lillie was the daughter of Robert Dolphus Armstrong and Amanda Caroline Butler.

Amy’s maternal grandfather was Robert Edward Lee Napier (the son of Isaac Wesley Napier and Priscilla “Puss” Turner). Robert was born in Tennessee. Isaac was the son of Shade Napier and Armilda Jane Johnson. Priscilla was the daughter of Mat Turner.

Amy’s maternal grandmother was Lura Kate Logan (the daughter of Roy Logan and Mildred “Millie” Smithson). Lura was born in Tennessee. Roy was the son of Quincy A. Logan and Ellen Lofton. Millie was the daughter of Clifton Smithson and Doash Campbell.

Genealogy of Amy Grant (focusing on her father’s side) – http://wc.rootsweb.ancestry.com