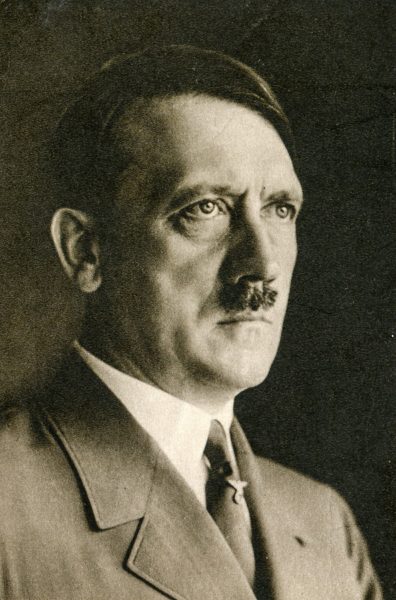 He was Time Magazine’s Person of the Year for 1938.

His parents, Klara/Clara (Pölzl) and Alois Hitler (born Schickelgruber/Schicklgruber/Schikelgrueber), were both Austrian, with some German ancestry on both sides. Alois might have had distant Czech ancestry. Hitler’s father was born in Döllersheim, Niederösterreich, Austria. Hitler’s mother was born in Spital, Weitra, Lower Austria, Austria. Hitler was married to Eva Braun, until their deaths.

Hitler’s maternal grandfather was Johann Baptist Pölzl (the son of Laurenz Pölzl and Juliana/Juliane Walli/Wally). Johann was born in Bauer in Spital. Laurenz was the son of Johann Pölzl and Theresia Ledermüller. Juliana was the daughter of Franz Anton Wally and Anna Maria Stumpner.

Hitler’s maternal grandmother was Johanna Hüttler/Hiedler (the daughter of Johann Nepomuk Hüttler/Hiedler/Huettler and Eva Maria Decker). Hitler’s grandmother Johanna was born in Spital. Hitler’s great-grandfather Johann was the son of Martin Hiedler and Anna Maria Göschl/Gröschl. Eva was the daughter of Joseph Tecker and Theresia Hinterlechner. Hitler’s great-grandfather Johann was named after a Bohemian saint, John of Nepomuk, which some view as evidence for Czech ancestry. However, John of Nepomuk was an important figure for Germans as well as for Czechs.

Hitler’s father was brought up with his mother’s surname, “Schickelgruber/Schicklgruber/Schikelgrueber”, and when he was five years old, Johann Georg Hiedler married his mother. Later in life, Alois stated that Johann Hiedler was his biological father. He went to a priest who agreed to add Johann Hiedler as his father on his birth certificate, which the state also proceeded in doing. He subsequently could legally change his name to that of his father (with a slightly different spelling).

Another theory is that Hitler’s biological paternal grandfather was Jewish. The theory is based on a claim made after the war by Hitler’s personal lawyer, Hans Frank. He stated that Hitler told him to investigate Hitler’s ancestry, after being blackmailed by his nephew, William Patrick Hitler, who threatened to reveal embarrassing facts about his ancestry. Hans Frank stated that when Hitler’s father was born, Hitler’s paternal grandmother was working in Graz, Austria, as a cook, for a Jewish family with the surname Frankenberger. Frank concluded that it was possible that Hitler’s biological paternal grandfather was the 19 year-old son of the family, Leopold Frankenberger. However, there is no evidence to suggest that a Frankenberger family was registered in Graz at the time, or that Leopold Frankenberger even existed at all. Also, Jews had been expelled from the Austrian region where Graz was located in the 1500s, and were not allowed to return until the time that Hitler’s father was around 30 years old.

Journalist Jean-Paul Mulders and historian Marc Vermeeren conducted a DNA study in 2010. They said that they tested saliva samples from 39 of Hitler’s living relatives, although they also said that they did not obtain many of the saliva samples directly from the subjects (in one case using a discarded napkin). They stated that the dominant haplogroup in their DNA was E1b1b1 (a haplogroup refers only to a distant patrilineal ancestor, who perhaps lived thousands of years before the individual tested). The haplogroup E1b1b1 is said to originate in North Africa. However, the result is totally meaningless, given that research estimates that some carriers of the haplogroup have been in Europe longer than 10,000 years. 8 percent of Austrians and 5.5 percent of Germans carry the haplogroup E1b1b.

Tags: AustrianGermanTime Person of the Year