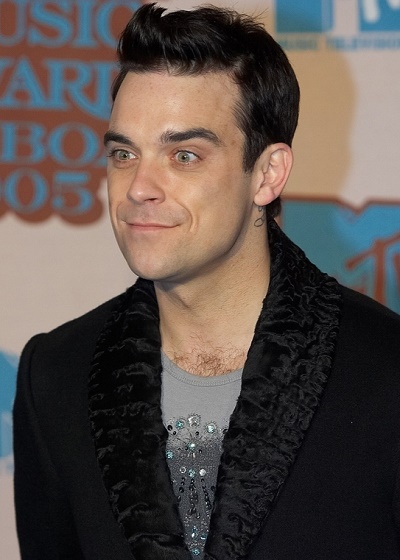 Williams in 2005, photo by prphotos

Robbie Williams is a British singer, songwriter, and entertainer. His career started in 1990 as a dancer and singer with the pop group Take That, with Gary Barlow, Howard Donald, Jason Orange, and Mark Owen. He then launched a successful solo career.

Robbie is the son of Teresa/Theresa Jeanette “Jan” (Farrell) and comedian Peter “Conway” Williams. He is married to American actress Ayda Field, with whom he has four children.

Robbie’s maternal grandfather was John Vincent “Jack” Farrell (the son of Martin Farrell and Mary Kelly). John was Irish, from Co. Kilkenny. Martin was the son of Sarah Phelan. Mary was the daughter of William Kelly and Bridget Healey.

Genealogy of Robbie Williams (focusing on his mother’s side) – https://www.geni.com