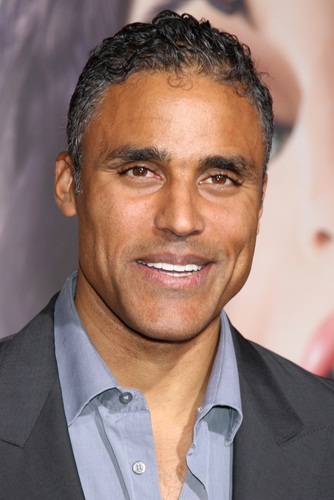 His father is black and his mother is white. His father, Ulrich Fox, is Bahamian. His mother, Dianne Gerace, was born in Trail, British Columbia, Canada, and is a retired track athlete who competed at the 1964 Olympics. Dianne is of half Italian and half Scottish ancestry. His sister is model and actress Jeanene Fox.

Rick grew up in the Bahamas and spent some time in the United States for high school. Rick has a son with his former partner Kari Hillsman; and a daughter with his former wife, actress, model, and producer Vanessa L. Williams.

Rick’s paternal grandfather was Edward Roosevelt or McDonald Fox (the son of Samuel Thomas Fox and Eliza Burrows). Edward was born in Deadmans Cay, Long Island, The Bahamas. Samuel was the son of Lewis Fox. Eliza was the daughter of Edward Burrows.

Rick’s maternal grandfather was Gabriel “Bob” Gerace (the son of Giusseppe Gerace and Concetta Granieri). Gabriel was born in Trail, British Columbia, Canada, to Italian parents. Concetta was the daughter of Francesco Granieri, who was born in Celico, Province of Cosenza, Calabria, Italy, and of Filomena Falcone.

Sources: Genealogy of Rick Fox (focusing on his father’s side) – https://www.geni.com

Genealogy of Rick Fox (focusing on his mother’s side) – http://worldconnect.rootsweb.ancestry.com