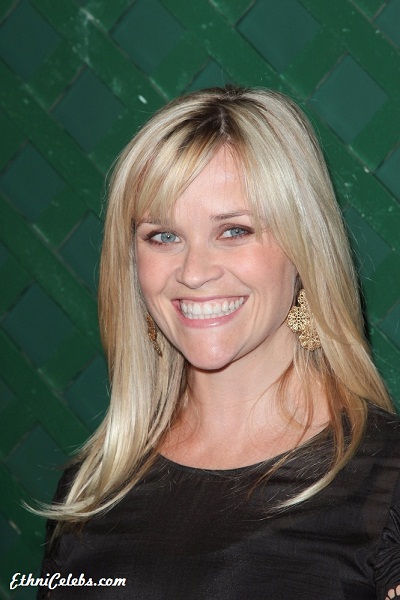 Witherspoon in 2012, photo by Prphotos

Reese Witherspoon is an American actress, producer, and businessperson. She won the Academy Award for Best Actress for Walk the Line (2005).

Reese is married to agent Jim Toth. She has two children with her former husband, actor Ryan Phillippe, and a son with Jim.

Reese has stated that a DNA test showed her to be of “63% Irish” descent. Reese does not appear to have that much Irish ancestry in her genealogy. It is possible that she took a 23andMe test, which may have listed her DNA as being 63% of the more general “British & Irish” category.

Reese’s paternal grandmother was Dorothea Anne Draper (the daughter of William Gilbert Draper and Carrie Mable Byrne). Dorothea was born in Tennessee. William was the son of Oliver Newton Draper and Mary Olive Cummins. Carrie was the daughter of Bascomb B. Byrne and Darthula T. Watts.

Reese’s maternal grandfather was Emmett Tom Reese (the son of Benjamin Thornwell Reese and Elizabeth “Lizzie” James). Emmett was born in Alabama. Benjamin was the son of William J. Reese and Mary Elizabeth Brown. Elizabeth was the daughter of Bryant James.

Reese’s maternal grandmother was Laura Jeanne Evans (the daughter of Thomas Renfroe Evans and Mary Arminda Joyner). Laura was born in Kentucky. Thomas was the son of Arthur Wiley Evans and Emily/Emmy Gertrude Renfroe. Mary Arminda was the daughter of Samuel Mitchell Joyner and Nellie Crow.

Genealogy of Reese’s paternal grandmother, Dorothea Anne Draper (focusing on her own mother’s side) – http://worldconnect.rootsweb.ancestry.com

Genealogy of Reese Witherspoon (focusing on her mother’s side) – http://familytreemaker.genealogy.com