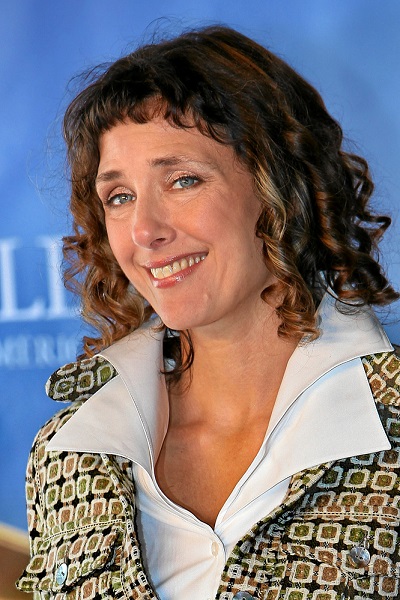 Miller in 2009, photo by Prphotos.com

Rebecca Miller is an American independent filmmaker, screenwriter, film director, actress, and novelist. She has written and directed the films Angela, Personal Velocity: Three Portraits, The Ballad of Jack and Rose, The Private Lives of Pippa Lee, and Maggie’s Plan, and appeared in films including Seven Minutes and Consenting Adults.

Her father was playwright Arthur Miller (Arthur Asher Miller) and her mother was photographer Inge Morath (Ingeborg Hermine Morath). Her aunt (father’s sister) was actress Joan Copeland. Rebecca is married to actor Daniel Day-Lewis, with whom she has two children.

Her father was Jewish (of Austrian Jewish, Polish Jewish, and Ukrainian Jewish descent). Her mother, who was Austrian, was the daughter of Catholic parents who had converted to Protestantism. At one point in her early years, Rebecca practiced Catholicism of her own accord.

Rebecca’s paternal grandmother was Augusta Barnett (the daughter of Louis Barnett and Rosie/Rose Leibel). Augusta was born in New York, to parents from Austria and/or Ukraine, with her father being from Radomyshl’, Radomyshl’s’kyi district, Zhytomyrs’ka oblast. Louis was the son of Joseph Barnett and Sarah. Rose was the daughter of Carl Leibel and Bella Schwartz.

Rebecca’s maternal grandfather was named Edgar Mörath (the son of Theodor Mörath and Alexandra). Edgar was born in Graz.

Sources: Genealogy of Rebecca Miller (focusing on her father’s side) – https://www.geni.com