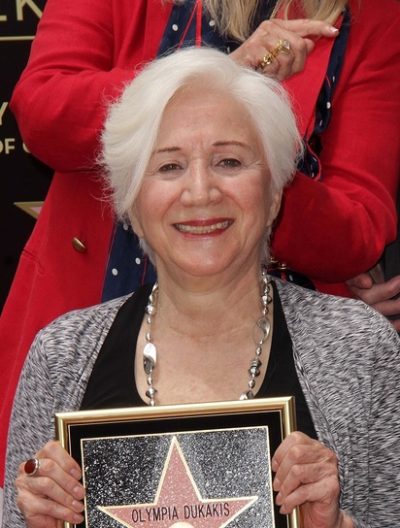 Dukakis in 2013, photo by s_bukley/Bigstock.com

Olympia Dukakis was an American actress, director, producer, teacher, and activist. She won the Academy Award for Best Supporting Actress for Moonstruck (1987).

Her parents, Alexandra (Christos) and Constantine S. Dukakis, were Greek, her father from Anatolia and her mother from the Peloponnese. Her brother was actor Apollo Dukakis. Her first cousin is politician Michael Dukakis, who was Governor of Massachusetts, from January 2, 1975 to January 4, 1979, and again, from January 6, 1983 to January 3, 1991; she won her Oscar in the 1988 ceremony, the year he was the Democratic presidential nominee. Their fathers were siblings.

Olympia was married to actor Louis Zorich, until his death, with whom she had three children. Louis was the son of Croatian parents.

Olympia’s paternal grandfather was named Stylianos/Stelianos Dukakis (the son of George Dukakis and Mary). Stylianos was born in Pelopi, Greece.

Source: Genealogy of Olympia Dukakis (focusing on her father’s side) – https://www.geni.com