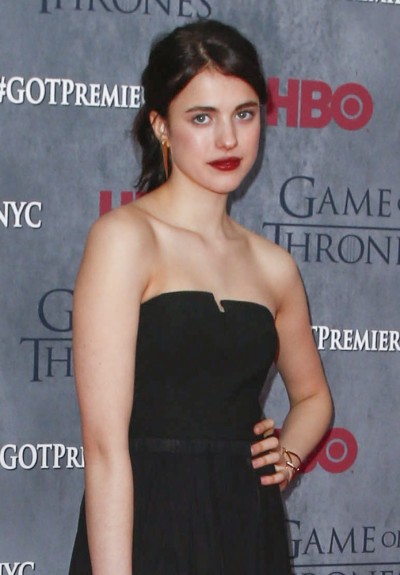 Qualley in 2014, photo by prphotos

Margaret Qualley is an American model and actress. She is the daughter of Paul Qualley (Paul James Qualley), a model, contractor, musician, and rancher, and Andie MacDowell, an actress and model. Her sister, Rainey Qualley, is also an actress. She was raised on a ranch in Missoula, Montana, and then in Asheville, North Carolina.

Margaret’s paternal grandfather was Lee James Qualley (the son of Norman Loyd Qualley and Maude E. Rohan/Rhonda). Lee was born in Wisconsin. Norman was the son of Thomas J. Qualley and Helena/Lena Barlow, who were born in Iowa, both of them to Norwegian parents. Maude was the daughter of Edward Rohan and Anna/Ann Jane Applebee.

Margaret’s paternal grandmother was Patricia Ann Rondou (the daughter of Norbert A. Rondou and Mabel Anna Thompson). Patricia was born in Wisconsin. Norbert was the son of Louis Alphonse Rondou, who was Belgian, of Walloon descent; and of Mary Anna Denessen, who was of Dutch and Belgian Flemish descent. Mabel was the daughter of William Henry Thompson and Nellie/Nelly Tierney.

Margaret’s maternal grandfather was Marion St. Pierre MacDowell (the son of John William MacDowell/McDowell and Rainsford Fairbanks DuBose). Marion was born in South Carolina. John was the son of William Joseph McDowell and Ione Elliott Vinson. Rainsford was the daughter of The Rev. McNeely DuBose, who was an Episcopalian minister, and of Rosalie Anderson.

Genealogy of Margaret Qualley (focusing on her mother’s side) – https://wc.rootsweb.com

Genealogies of Margaret’s mother (focusing on her own father’s side) – http://worldconnect.rootsweb.ancestry.com