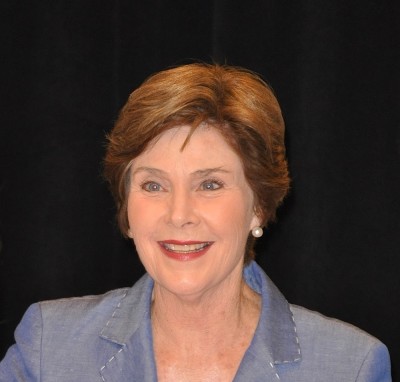 Laura Bush is an American educator, who served as First Lady of the United States from 2001 to 2009. She was also previously First Lady of Texas, from 1995 to 2000. Laura is the wife of President George W. Bush. Their twin daughters are activist Barbara Bush and teacher, author, and journalist Jenna Bush Hager.

Laura is the daughter of Jenna Louise (Hawkins) and Harold Bruce Welch.

Laura’s paternal grandfather was Mark Anthony Welch (the son of William Franklin Welch and Nancy Jane Aldridge). Mark was born in Texas. William was the son of Samuel Welch and Elizabeth Covington. Nancy was the daughter of James Thomas Aldridge and Mary Chadwell.

Laura’s maternal grandmother was Jessie Laura Sherrard (the daughter of Joseph Allen Sherrard and Eva Louise Lamaire/Lemaire). Jessie was born in Texas. Joseph was the son of William Fowler Sherrard and Martha Jane Allen. Eva was born in New York, to Louis Lamaire/Lamarre/Lemaire and Mary L., who were French.