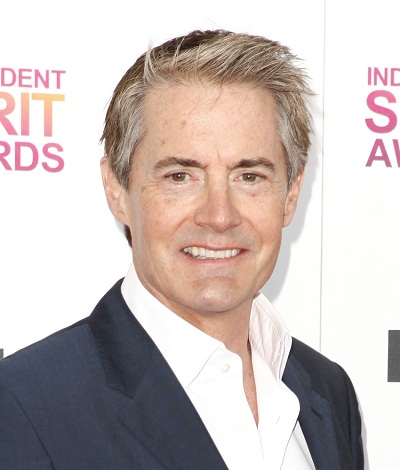 MacLachlan in 2013, photo by PrPhotos

Kyle MacLachlan is a Golden Globe Award-winning American actor. He is known for starring in the cult movies Dune and Blue Velvet and the television series Twin Peaks and Desperate Housewives.

Kyle is the son of Catherine Louise (Stone) and Kent Alan MacLachlan. He is married to publicist Desirée Gruber, with whom he has a son.

Kyle’s maternal grandfather was named Jonathan Beard Stone (the son of Samuel Stone and Katherine). Jonathan was born in Colorado.

Kyle’s maternal grandmother was Hazel I. Oakes (the daughter of Charles Alexander Oakes and Henrietta Louise/Janie Bach). Hazel was born in Minnesota. Charles was born in Canada, the son of Henry Charles Oakes and Julia Hebb. Henrietta was the daughter of Fredrich/Friedrich Leopold Bach and Mary Wacherhauser.

Genealogy of Kyle’s maternal great-great-grandfather, Fredrich/Friedrich Leopold Bach (focusing on his own father’s side) – http://worldconnect.rootsweb.ancestry.com

Interview with The Guardian – http://www.theguardian.com