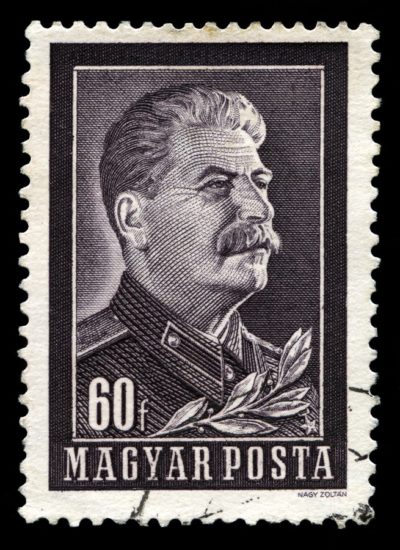 portrait of Joseph Stalin on a Hungarian postage stamp printed c. the 1950s, photo by chrisd2105/Bigstock.com

Joseph Stalin was a Georgian revolutionary, politician, and dictator. He led the Soviet Union for approximately three decades. Stalin was General Secretary of the Central Committee of the Communist Party of the Soviet Union, from 3 April, 1922 to 16 October, 1952, as well as Chairman of the Council of Ministers, from 6 May, 1941 to 5 March, 1953, his death.

His father, Besarion Vanovis Jughashvili, was Georgian, and possibly had some Ossetian ancestry. His mother, Ketevan “Keke” (Geladze), was also Georgian. He was married to Kato Svanidze and Nadezhda Alliluyeva, until their deaths. He had a son with Kato and two children with Nadezhda.

Stalin’s paternal grandfather was Ivan Vano Jughashvili (the son of Zaza Jughashvili). The identity of Stalin’s paternal grandmother is not known. It is thought that Ivan was of at least partly Ossetian descent. The poem “Stalin Epigram” by Russian poet Osip Mandelstam is thought by some, including British historian Robert Service, to perhaps reference Stalin’s Ossetian ancestry in the last line. The line goes, depending on the translation, “and Ossetian torso is wide” or “for the broad-chested Ossete.” It is also said that Stalin’s surname, Jughashvili, is of Ossetian origin, only with the Georgian suffix shvili added, since Jugayev is a common Ossetian surname, and many Ossetian surnames were written with Georgian suffixes before the Revolution. Stalin’s birthtown, Gori, is not far from the border with the disputed territory South Ossetia, where the Ossetians live.

There have been some claims that Stalin was of partly Jewish descent. These derive mostly from anti-Jewish websites and sources that claim that Stalin’s surname, Jughashvili, means “Jew-son” or “son of a Jew” in Georgian. Shvili does mean “son” or “child,” but the Georgian word for “Jew” is “Ebraeli,” not “Jugha.” No evidence has been produced that Stalin had Jewish ancestry.

Tags: georgianOssetianTime Person of the Year