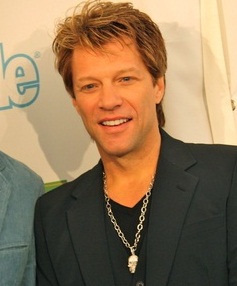 Jon Bon Jovi is an American singer, songwriter, record producer, philanthropist, and actor. He is a member of the rock band Bon Jovi. The band’s other members include or previously included David Bryan, Richie Sambora, and Tico Torres. His acting roles include the films Moonlight and Valentino and U-571 and the series Ally McBeal.