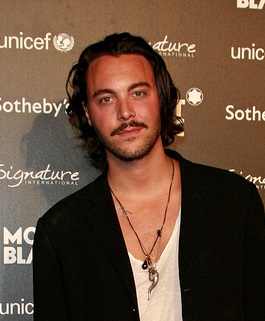 Huston in 2009, photo by Joe Seer/Bigstock.com

Jack Huston is a British actor. He is the son of Lady Margot Lavinia (Cholmondeley) and Tony Huston (Walter Anthony Huston), who is an actor, writer, and assistant director. His father is American and his mother is British. His aunt is actress Anjelica Huston, his half-uncle is actor Danny Huston, and his half-aunt is writer and editor Allegra Huston. Jack has two children with his partner, American model Shannan Click.

Jack’s paternal grandmother was of Italian descent, from Ispra, Lombardy, while one of Jack’s maternal great-grandmothers was Jewish (of Iraqi Jewish, Indian Jewish, German Jewish, and French Jewish descent, with distant Austrian Jewish and Dutch Jewish). Through his Jewish lineage, Jack is a direct descendant of the founders of both the Sassoon and Rothschild families. The rest of Jack’s ancestry is mostly English, along with some Scottish, Scots-Irish/Northern Irish, and distant German.

Jack’s paternal grandfather was John Huston (John Marcellus Huston, a director and actor, the son of Walter Huston [Walter Thomas Huston], an actor, and of Rhea Catharine Gore). Jack’s grandfather John was born in Missouri, U.S., and had English, Scottish, Scots-Irish/Northern Irish, distant German, and remote Portuguese, ancestry. Some of his family had lived in Canada. Jack’s great-grandfather Walter was a Canadian-born, Oscar-winning actor, as well as a singer. Water was the son of Robert Moore Houghston and Elizabeth McGibbon. Jack’s great-grandmother Rhea was the daughter of John Marcellus Gore and Adelia Frances Richardson.

Jack’s paternal grandmother was Enrica “Ricki” Soma (the daughter of Antonio/Anthony Angelo Soma and Angelina Fantoni). Enrica’s parents were Italian, from Ispra, Lombardy. Antonio was the son of Filippo Soma and Giusippina Inzaghi. Angelina was the daughter of Andrew J. Fantonie and Henrietta Binda.

Jack’s maternal grandmother was Lavinia Margaret Leslie (the daughter of John Leslie and Nanette Margaret Helen Gilliat). Jack’s grandmother Margaret was born in Newark, Nottinghamshire, England. John was the son of Charles Frederick Henry Leslie, a cricketer, and of Maud Foster; Charles’s father, Henry David Leslie, was a composer and conductor. Nanette was the daughter of Howard Gilliat and Helen Skipwith.

A DNA test of Jack’s aunt (father’s sister) Anjelica whose results were displayed on the show Finding Your Roots with Henry Louis Gates, Jr. (2019) stated that Anjelica’s genetic ancestry consists of:

Genealogy of Jack Huston (focusing on his father’s side) – http://www.wikitree.com

Genealogy of Jack’s father (focusing on his own father’s side) – http://worldconnect.rootsweb.ancestry.com