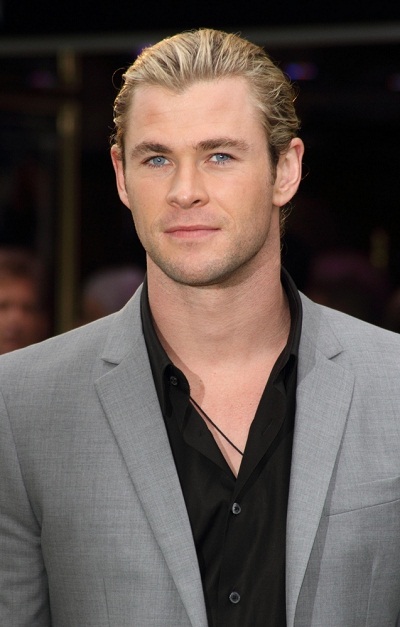 Hemsworth in 2012, photo by Prphotos

Chris Hemsworth is an Australian actor. His roles include The Cabin in the Woods, Rush, Vacation, In the Heart of the Sea, Bad Times at the El Royale, Star Trek, and Thor of the MCU.

Chris was selected People Magazine’s “Sexiest Man Alive” in 2014. He is the second Australian-born man (Hugh Jackman, in 2008, is the first), and, thus far, the only man of significant Dutch heritage, to have been given this title by the magazine (although Patrick Swayze, the 1991 title recipient, may have had a Dutch great-grandfather).

Chris’s patrilineal ancestry can be traced to John Hemsworth, who was born, c. 1804, in Leeds, West Yorkshire, England.

Chris’s paternal grandfather was Keith Hemsworth (the son of William Hamilton Hemsworth and Frances Margaret Jobson). William was born in Footscray, Victoria, Australia, the son of John Richard Hemsworth, who was of English descent, and of Carroline/Caroline Sophie Fahle, who was the daughter of German emigrants, Heinrich Conrad Fahle, from Minden, Westphalia, then belonging to Prussia, and Carroline/Caroline Schwer, from Hannover. Chris’s great-grandmother Frances was the daughter of John/Jack Jobson, who was of English and Scottish descent, and of Janet Bibby; Janet’s father, Thomas John Bibby, was born in Argyle, Scotland, and Janet’s mother, Ann/Anne/Annie McKeown/McEwan, was born in Dublin, Ireland.

Chris’s paternal grandmother was Gladys Priscilla Outen (the daughter of Charles Whynam Outen and Priscilla Louise Dainton). Charles had English and Irish ancestry, and was the son of Charles George Outen and Bridget Cross. Chris’s great-grandmother Priscilla was the daughter of James Henry Dainton, who was born in Clifton, Gloucestershire, England, and of Elizabeth Victoria Parker, who was born in Devon, England.

Genealogy of Chris Hemsworth (focusing on his father’s side) – http://records.ancestry.com