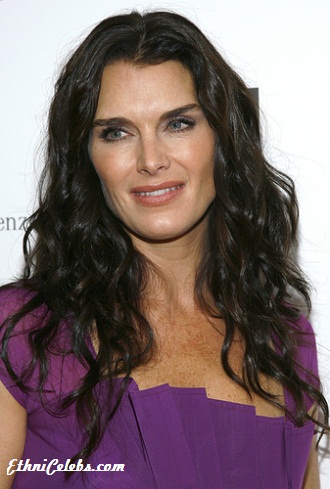 Brooke Shields is an American actress and model. She has starred in the films Pretty Baby, The Blue Lagoon, and Endless Love, among others.

Brooke is the daughter of Theresia “Teri” (Schmon) and Francis Alexander “Frank” Shields, a businessperson and executive. Brooke is married to television writer Chris Henchy, with whom she has two children.

On the television show Who Do You Think You Are?, 2010, Brooke explored her paternal grandmother’s remote French ancestry.

Brooke’s paternal grandfather was Frank Shields (Francis Xavier Alexander Shields, the son of Alexander John Shields and Alice A. Haggerty). Frank was born in New York, New York, and was a top-ranking amateur tennis player, and an actor. He was of Irish descent. Brooke’s great-grandfather Alexander was the son of Alexander John Shields and Ellen Maria Holtan, both of whom were the children of Irish parents. Alice was born in Pennsylvania, to Irish parents, Dennis Haggerty, from County Donegal, and Margaret Gallagher.

Brooke’s paternal grandmother was Donna Marina Torlonia, dei Principi di Civitella-Cesi (the daughter of Don Marino Torlonia, 4th Prince of Civitella-Cesi, and of Mary Elsie Moore). Brooke’s grandmother Donna Marina, an aristocrat, was born in Palazzo Núñez-Torlonia, Rome, Lazio, Italy, and was an Italian princess. She was also known as Marina Torlonia Shields and Marina Torlonia Slater. Brooke’s great-grandfather Don Marino Torlonia was Italian, and also had one eighth German, and distant Spanish and French, descent; he was the son of Don Guido/Giulio Torlonia and Donna Teresa Chigi della Rovere-Albani. He descended from many noble and aristocratic families, including the House of Medici, House of Este, House of Gonzaga, and House of Montefeltro. Brooke’s great-grandmother Mary was born in Brooklyn, New York, and had English, Scottish, and remote Dutch, descent, the daughter of Charles Arthur Moore and Mary L. Campbell.