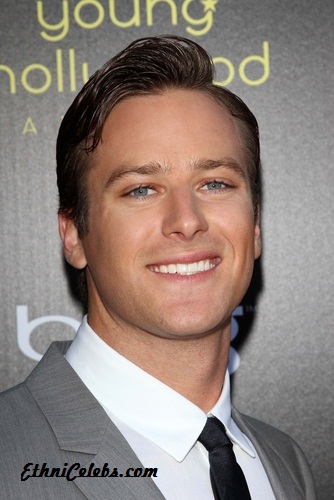 Armie Hammer is an American actor. He is known for playing, in a dual role, athlete/entrepreneur twins Cameron Winklevoss and Tyler Winklevoss in the film The Social Network (2010), and for starring in the films The Lone Ranger, Call Me By Your Name, and Rebecca, among other roles.

Armie is the son of Dru Ann (Mobley) and Michael Armand Hammer, a businessperson. He grew up in Los Angeles, Dallas, and the Cayman Islands. Armie is married to model, reporter, and actress Elizabeth Chambers, with whom he has two children.

Armie’s paternal great-grandfather was famous businessperson Armand Hammer, who ran the company Occidental Petroleum, specializing in oil and gas, from 1957 until 1990, his death. A picture, c. 1989, of Armie together with his great-grandfather Armand, can be seen here. Armand Hammer was named after Armand Duval, a character in the book La Dame aux Camélias (The Lady of the Camellias), 1848, by Alexandre Dumas.

Armie has described his own background as “half Jewish.” His great-grandfather Armand was Jewish (of Russian Jewish descent). Armie’s other ancestry is German, English, Scots-Irish/Northern Irish, Scottish, 1/16 or 1/32 Russian (approximately), 1/32 Polish, 1/32 Danish, Swiss-German, 1/128 Greek, and 1/512 Cherokee Native American.

Armie’s paternal grandmother was Glenna Sue Ervin (the daughter of Glen Williams Ervin and Bertha Estelle/Stella Bannerman). Armie’s grandmother Glenna was born in Texas. Armie’s great-grandfather Glen was the son of Robert A. Ervin and Allie Belle Williams. Bertha was the daughter of Charles William Bannerman and Frances Elizabeth Dunn. Armie’s grandmother Glenna had English, Scots-Irish/Northern Irish, and Scottish, ancestry. One of Glenna’s six times great-grandfathers was Chief Kanagatucko, a Cherokee elder who served as the First Beloved Man of the Cherokee, from 1753 until 1760 (his death); Chief Kanagatucko’s wife, Su-Gi (Wild Onion) of the Wolf Clan, was also Cherokee. Their daughter, who was also known as Sussannah Hopper, married James William David McDaniel, Armie’s seven times great-grandfather.

Armie’s maternal grandfather is Douglas Lee Mobley (the son of William L. “Billy” Mobley and Jessie). Douglas was born in Tulsa, Oklahoma, and has English, Scottish, and German ancestry. William was born in Texas, the son of John David Mobley and Lula Maxwell.

Armie’s maternal grandmother was Donna Rae Kaufman (the daughter of William George/S./F. Kaufman and Leta Faye Young). Donna was born in Ogema, Wisconsin, or Illinois. William was born in Illnois, the son of John Peter Kaufman, who was of German and Swiss-German descent, and of Amelia/Emily Miller, who was of German ancestry. Leta was born in South Dakota, the daughter of John Elgen/Elgie Young and Mary Luella Baden, whose own father, James Martin Baden, was Danish, from Torrild, Aarhus, and whose own mother, Nancy Elizabeth Harrison, was American, from Muscatine, Iowa.

Genealogy of Armie Hammer (focusing on his father’s side) – https://www.wikitree.com

Genealogies of Armie’s maternal great-great-grandfather, John David Mobley (focusing on his own father’s side) – http://worldconnect.rootsweb.ancestry.com
https://www.ancestry.com