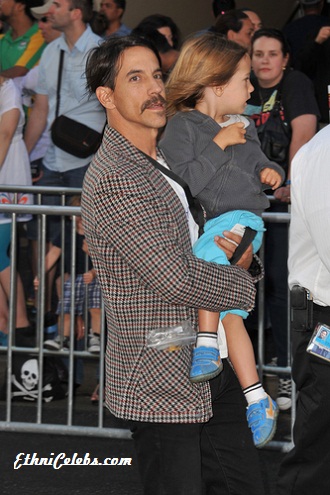 Anthony Kiedis is an American singer, songwriter, and musician. He is known as the lead singer of the band Red Hot Chili Peppers. Other members of the band include/have included Flea, John Frusciante, Josh Klinghoffer, Dave Navarro, and Chad Smith.

Anthony is the son of Margaret Idema and Blackie Dammett (born John Michael Kiedis), an actor and author. Anthony has a son with his former partner, model Heather Christie.

In his autobiography, Scar Tissue, 2004, Anthony wrote that his paternal grandmother Molly Vanderveen’s ancestry was “a pastiche of English, Irish, French and Dutch (and, as we’ve recently discovered, some Mohican blood, which explains my interest in Native American culture and identification with Mother Earth).” In his autobiography, Lords of the Sunset Strip: An Autobiography (2013), Anthony’s father Blackie Dammett wrote that Anthony’s grandmother “was a Duchess in the Dutch city of Grand Rapids, a symphony of French-Canadian, English, Irish, Algonquian Native American and her Netherlandic origins that traced all the way back to 1066. In the 17th century, some of our more radical Vander Veens risked the whole kit and caboodle when they embarked on a treacherous voyage to find their own new land of opportunity. After first settling in New Amsterdam, my direct descendents migrated to upstate New York and intermarried with Mohican Indians.”

Anthony’s paternal grandmother was Molly/Mollie Rose Vanderveen/Vander Veen (the daughter of Richard Box/D. Vanderveen/Vander Veen and Catharine/Catherine Alzina Lauzon). Molly was born in Michigan. Richard was born in Michigan, to a Dutch father, Christiaan Vanderveen, and to an American-born mother, Maria Louisa Taylor, who was from New Jersey. Catharine was Canadian, and was the daughter of Augustine H. Lauzon, who was French-Canadian, from Québec, and of Elizabeth Louisa Alyea, who had English, Irish, Dutch, and distant French Huguenot, ancestry.

Anthony’s maternal grandmother was Mary G. McCully (the daughter of Highland/Hiland Emmett McCully and Desire/Dessie E. Skidmore). Mary was born in Michigan. Highland was the son of Phillip J. McCully and Hannah Maria Smith. Desire was the daughter of Nathan J. Skidmore and Mary A. Smitley/Smithley.