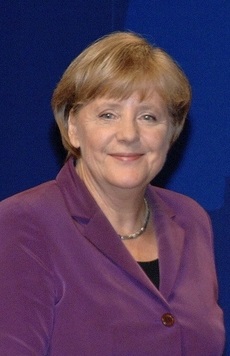 She was Time Magazine’s Person of the Year for 2015.

Her mother, Herlind (Jentzsch), a teacher, was born in Danzig, now Gdańsk, Poland, of German descent. Her father, Horst Kasner, was a Protestant theologian and pastor, who was born in Berlin, of Polish and German ancestry. His family name was changed from Kaźmierczak to Kasner in 1930. Angela is married to quantum chemist Joachim Sauer. Her surname Merkel is from her former husband Ulrich Merkel.

Angela is the sister of Marcus Kasner, a physicist, and Irene Kasner, an occupational therapist.

Angela’s paternal grandfather was Ludwig/Ludwik Marian Kasner (born Ludwig Marian Kaźmierczak, the son of Ludwik Wojciechowski and Anna Kaźmierczak). Angela’s grandfather Ludwig was a German national of Polish descent, and was born in Posen, now Poznań. Anna was the daughter of Bartłomiej Kazmierczak and Apolonia Bielejewicz.

Angela’s paternal grandmother was named Margarethe Drange. Margarethe was from Berlin, and was of German descent.

Angela’s maternal grandfather was Willi Jentzsch (the son of Friedrich Wilhelm Jentzsch and Wilhelmine Pauline Minna Wilde). Angela’s grandfather Willi was born in Bitterfeld-Wolfen, Prussia, German Empire, now the Federal Republic of Germany, and was a school administrator and senator in the Free City of Danzig. Friedrich was the son of Johann Christoph Jentzsch and Anna Marie Hanke. Angela’s great-grandmother Wilhelmine was the daughter of Friedrich Carl Wilde and Caroline Wilhelmine Ehrenberg.

Tags: Chancellor of GermanyGermanPolishTime Person of the Year